Reasons to run at Christmas

5 REASONS TO BUY BEFORE THE LAST DAY OF BLACK FRIDAY

11 Tips for Running in the Rain

Be Urban Running, sustainable footwear to take care of the environment

THE GUIDE TO SHOE SIZES IN SPORTS BRANDS

Be Urban Running Is An Official Authorised Distributor Of Sports Brands

Sports Leggings for Training and Racing

What's new in the Clifton 8

Features of the Hoka Clifton 8

Type of runner who needs the Clifton 8

The Clifton 8 is a winning and perfect combination of softness, cushioning and lightness.

The HOKA Clifton 8 is a very rolling shoe with a lightness that stands out when you hold it in your hands. Since when you see them in the images that high profile leads you to think that they are heavier.

Like all Hoka models, they are ideal running shoes for people who want to avoid at all costs to suffer discomfort or overloads in the feet or legs when running.

This is due to the great cushioning of the Hoka One One One and its construction.

New features of the Clifton 8

In the extra-sporting part we will emphasize that they inaugurate the production of vegan shoes in Hoka, they are of the first ones in launching to the market. What we don't know is if being vegan has something to do with sustainability, let's hope so, heh, heh...

In their version 8 they come with a midsole that is even lighter and with a greater responsiveness. It is made with one of Hoka Running's lightest and most energetic foams to date.

The silhouette has a slightly more streamlined look thanks to a revamped upper.

I want the Hoka Clifton 8

Features of the Hoka Clifton 8

It has been redesigned in some of its settings and you can see that the rear part of the collar is further accentuated to follow the style of models such as Carbon X2 or Mach 4 and that it achieves a very racing aesthetic. 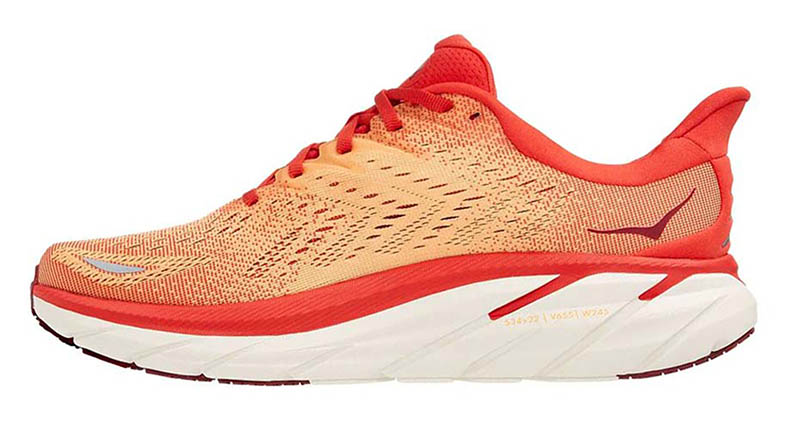 Regarding the lighter weight of the EVA midsole compound, the weight has been reduced by up to 15% compared to the previous version, the Clifton 7.

Yes, on our website we classify them as training shoes. But for the popular runners they are a fantastic shoes to wear in their competitions.

When looking at the midsole we will see that it is not straight, but it is like curved: It is the so called metarocker geometry. This shape will make each of your steps faster and more efficient.

That metarocker is a way to improve your stride and also get comfort and speed.

It is made in two different parts.

In the areas where the foot treads the most there is high abrasion rubber to have an optimal grip on the asphalt.

And in the rest of the sole there is an extra rubber so nobody can say that Hoka models are not very durable.

Learn about all Hoka Running shoes

Type of runner who needs the Clifton 8

They are a very good option for natural runners, for long distance runners who run for volume and long competitions such as marathons, half marathons, etc.

The Hoka Clifton 8 running shoes are made to run kilometres and kilometres.

Go for a run with lightweight, cushioned and breathable shoes that allow you to run comfortably and without feeling that feeling of weight on your feet.

In each of your steps you will notice high stability in the impacts thanks to its sole and its Eva midsole with full compression.

You need to login or create account
Product added to wishlist